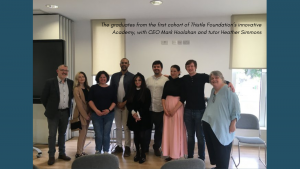 A couple of weeks ago I was honoured to speak at a ceremony arranged by the Thistle Foundation in Edinburgh at which certificates were awarded to the first cohort of graduates from the charity’s innovative new Academy.

Nine women and men from all sorts of backgrounds and walks of life had begun the intensive programme 10 weeks earlier, of whom seven completed the challenging course. They now join Thistle teams supporting people living with a long-term health condition, disability or facing a challenging life situation.

The graduates made a joint presentation to the gathering of existing Thistle staff and guests – including some of their own family members – about what they had learnt. This included a range of practical skills and technical understanding about the legal and regulatory context of social care in Scotland.

However, what was striking was the confident way in which their presentation contextualised these and other detailed topics within a wider understanding of what it means to support people to live fully as citizens and exercise their human rights.

Earlier in the same week, leaders of England’s NHS Confederation wrote to the Prime Minister urging a minimum pay rate of £10.50 for care workers to restore the financial advantage of choosing care work rather than alternative local jobs.

They pointed out that one in ten social care vacancies in England are unfilled, that there is a growing gap between demand and supply for home care, and that this is leading in turn to more and longer delays to hospital discharge.

I understand why NHS leaders made this request and I hope it succeeds. But when I contrast their argument with the ambition shown by Thistle and its Academy graduates I see two very different visions of what is meant by ‘social care’.

“In the context of the cost-of-living crisis and a strong job market,” said the NHS Confed, explaining its letter to the PM, “there is a real risk that more social care workers will move to other sectors like retail, hospitality and distribution”.

True, and from day one Thistle is paying its Academy entrants more than the £10.50 per hour proposed by the Confed. But Thistle is also offering much more than that: a transformative vision about which its graduates spoke with inspiring passion, and, critically, the training and organisational environment needed to make it a reality.

One of them expressed the vocation he was taking up with Thistle as “giving everyone the chance to meet their best friend,” a way of seeing the role that underlines his new employer’s commitment to ‘honouring the unique individuality and perspective of the people we support’.

Thistle’s leaders understand that if their employees are to consistently support that ‘person-centred approach’ they must themselves be enabled and supported to bring their own ‘unique individuality and perspective’ to the role, within a clear normative framework.

We in Buurtzorg Britain & Ireland are proud to be working with Thistle to support this vision with learning and development support in self-managed team work and the leadership mindsets, coaching skills and organisational supports required for its success.

And we’re confident too that such a vision for social care, based on supporting people to develop and draw upon their own and their community’s strengths, will also produce a much sounder return on the investment of public resources needed to make it happen.